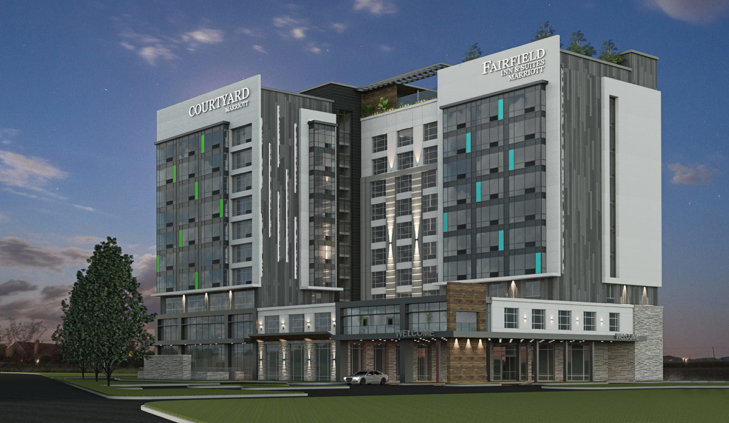 A 15-story building featuring two Marriott-branded hotels is just one part of what a Nashville developer is planning in an estimated $80 million project next to one of Nashville’s trendiest entertainment spots.

Jarratt Bell, president of Skyline Hospitality LLC, said in an interview that his group also plans to build a seven-story apartment complex with 250 units. The two buildings, with a motor court in-between, would have about 600 parking spaces combined and a bit of retail, Bell said.

Those newly disclosed details paint the full picture of a project we first reportedon April 30. Bell said his group is under contract to buy the property at 306 Cowan St., next door to the buzzy Topgolf high-tech driving range and entertainment complex. On that range, golfers look out over the immense 105-acre site dubbed River North, where Chicago’s Monroe Investment Partners is pursuing a wide-ranging development in buildings that zoning allows to be nearly 40 stories.

“To be next to Topgolf and to be on the edge of the River North development, this area will be a gem for the city,” Bell said. “We’ve got views of Nashville to the south, sunsets to the west, and East Nashville and the vibe it has. River North gives us another skyline to look at. We’ll really be in the heart of things.

“If you’d asked me 15 or 20 years ago about the foot of the Jefferson Street bridge having great views, I’d have said, ‘I’m not sure that’ll be the best,'” Bell added.

Bell said preliminary designs are ongoing, a stage at which a developer typically does not have full financing solidified for a project of this scale. A Marriott (Nasdaq: MAR) official told the NBJ that the planned Courtyard by Marriott and Fairfield Inn & Suites could be open by the end of 2020.

“There aren’t really any top-notch hotel brands, certainly Marriotts or Hiltons, on the east side of the Cumberland River,” Bell said.

Want to join the discussion?
Feel free to contribute!